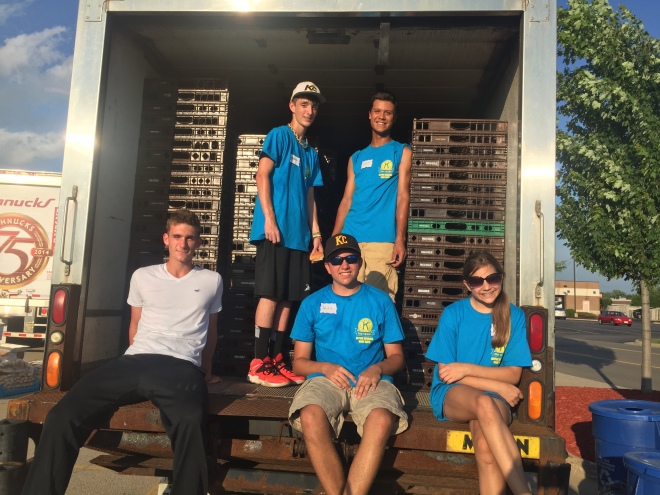 This past Saturday, a group from K Cancer Baseball headed to the Schnucks parking lot on East State Street in Rockford, Illinois to take part in the annual Kiwanas Brat Days. This is the fundraiser that provides the budget for the Alpine Kiwanas to do all of the amazing things that they do in the community. We were happy to be a part of it!

I was proud of the way the guys (and gal) handled themselves. They intentionally volunteered for the 4 hour shift that included breaking down the tents and equipment and unloading it in the storage shed. I had a conversation with one of the young men early in our 4 hour shift and we spoke about having a personal philosophy of never letting anyone out work you and the importance of finishing strong in whatever you start. When you see how hard all of the people involved in the Kiwanas Brat Day work, it is a challenge not to let anyone outwork you!

I watched for the rest of the day. Anytime there was something hard to do, he was in the middle of it. When we ended the day at the storage shed, he was up in the truck helping with the heavy lifting. K Cancer Baseball is blessed to spend time with many who face uphill battles and have to outwork most folks in order to keep any semblance of “normalcy” going. We are constantly inspired by them and hope to share that ethic with everyone we meet! 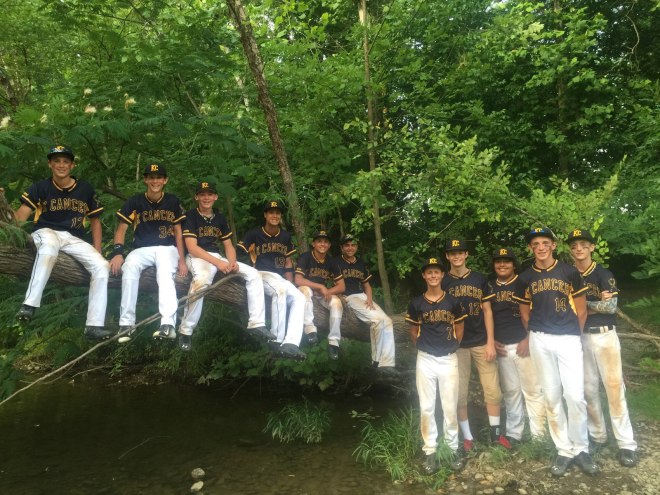 This past weekend the K Cancer Baseball Awareness team headed down to Sevierville, Tennessee to represent us in the 14 and under Volunteer Regional Tournament. The team took third place and almost made it to the championship, losing the elimination game by one. The baseball is a lot of fun but weekends like this always end up being about so much more than that.

So the hotel where most of the families were staying had a tiny issue. Nearby road construction took out the water main to the area which left the hotel dead in the water (pardon the pun!). You find out a lot about folks when things don’t go exactly as they had planned! Imagine taking a trip you look forward to all year and the hotel loses water. How do you respond? How do you think the hotel staff were expecting everyone to respond?

Everyone had great attitudes about it. One of the team Mom’s (Kim Hesano) took the bull by the horns and worked with the hotel staff and our parents to find rooms for everyone at other hotels and also arranged for breakfast. Instead of screaming and hollering she rolled up her sleeves and made the best out of the situation for not only herself, but everyone else on the team as well.

Watching how Kim and all of the parents on the team handled the situation made me think about what we do. In no way am I comparing the hotel being out of water with a family facing childhood cancer, it just reminded me of HOW INSPIRING the families we have met who handle things the same way are to us! They face their situations head on and do the best with what they have. They take the bad as best they can, but they also make sure to take the good when it presents itself. They don’t let the challenges they face with their child totally define their experience.

So they figured out the hotel arrangements and we made it back for day two of the tournament. We had our awareness tent set up while our team played and we had several visitors stop by to ask about what we do. One opposing team coach even bought K Cancer Baseball shirts for his entire team! We had several umpires stop by and buy shirts. After our games were done on Saturday evening, the gentleman who ran the tournament for Gameday USA came up to us and said that they had been on our website reading about what we do and that they passed a hat (literally). He handed me over $100 to go towards our efforts! That money will go with everything we raise between now and July 27th to back “Team Sammy” in our Grudge Match with “Team Matthew” to see which team can raise the most money to fund a childhood cancer research project at Lurie Children’s Hospital in their name!

Wouldn’t it be cool if someone from one of the teams we played this past weekend (from several different states) stops and looks around their community to see if there are some needs that need to be met, and then tries to make a difference? That wouldn’t have been possible if the K Cancer Baseball group let the challenges of the weekend dictate their mood. When life gives you lemons…

This has been a roller coaster ride week for K Cancer Baseball. Sometimes life will send you sadness and joy all at the same time, this was one of those weeks.

Our 14U Awareness Travel Baseball Team competed in the Belvidere Classic tournament in Belvidere, Illinois. It is always a well run event. We met some great people and played against some solid teams. On Saturday, we had some special guests stop by to watch us play.

First it was little Matthew Erickson. He is one of the coolest little guys in the world and a fighter. The best thing about Matthew is that he is always smiling! His Mom, Sue, brought us one of the cutouts of Matthew that were displayed in the local Walmarts (Matthew is the Illinois Champion for Children’s Miracle Network). She also brought us a fresh supply of bracelets for the guys on the team that say, “Defined by God, not by cancer. Team Matthew!” If you see a grey bracelet on our players during their games you know what they are now!

Next we had a visit from little Riley. Riley was recently transported to the area so that he could receive treatment at Lurie Children’s Hospital. He is looking stronger already! We were even able to get a picture of him with Adrian Estrada holding him and he didn’t cry (babies are allergic to Adrian!).
The team ended Saturdays action with a 3-0 record and the top seed in the tournament. Everything was going well! Then we received a call that changed everything. We were blessed to have recently met a great local family who was facing the biggest battle you can imagine. Their beautiful little girl was losing her fight with Brain Cancer. She had been sent home to be with family. We prayed for a miracle but early in the a.m. on Sunday morning, we got the news that little Gisselle had passed.
It turns out though, that miracles can take many forms. Gisselle spent her last moments surrounded by family members who loved her intensely. She passed peacefully and then at around 3:00 a.m. in the morning, birds just outside the home burst into song! Gisselle passed peacefully surrounded by family, and the family was given peace. The miracle was given.
When the guys on the team heard about all that the family was going through, it was decided that we would dedicate the tournament to Gisselle. It was a small gesture, but it meant a lot to the guys. There was one game left before the championship. Winner continues, loser goes home. We REALLY wanted to win the tournament for Gisselle.
The game started off rough. We were down 4-0 after the first inning. The opposing team scored 4 more in the top of the second inning and when we came up to bat we were down 8-0. We gave up 1 run in the prior 4 games! The guys never stopped believing and started chipping away. Down 8-2 after 2 innings. Down 8-3 after 3 innings. Down 8-4 after 4 innings. Down 8-6 after 5 innings. We had one inning left because of the time limit. We took the field and gave up 1 more run. So our last at bats and we were down 9-6 with our last 2 batters in the lineup due up. It was a good effort but it didn’t look like we would be able to win the tournament in honor of Gisselle.
Then the first guy up to bat hits a single. Then the second guy does the same. Then the third guy and the fourth! Still down 9-7! Our number 3 hitter hadn’t been his usual self all weekend. He comes up with bases loaded, down by 2. He hits a shot to left center for a double to clear the bases! Then our 4 hole hitter knocks him in. The next batter scores him and we went on to win 12-9! A little “Divine Intervention” Maybe? 🙂

The next game was the championship and it went perfectly for us and we won in convincing fashion 9-1 by the 8 run rule. We had the typical trophy presentations immediately following. The guys worked hard this year and took the championship and had the trophy to show for it. Now we put the trophy in the trophy case to show off to friends and family right?
Nope. We won this tournament in honor of Gisselle. The guys all signed the trophy and then later that night we presented the trophy to Gisselle’s Mother. As you can imagine, a few tears followed. On Wednesday we were blessed to be allowed to attend Gisselle’s funeral and see all of the people who were impacted by this wonderful little girl. We left the whole experience impacted by the way her family held on to the joy from their time with Gisselle and how they gave as much of their sadness as they could over to the Lord.
We hope to continue along that same path as an organization. Our hope is that K Cancer Baseball can not only hold on to all of the joy that comes our way as we support the amazing families in the stateline area who are working to strikeout their childs cancer, but pass it on to new families we meet who are just beginning their battle and need a little hope. In honor of Gisselle… 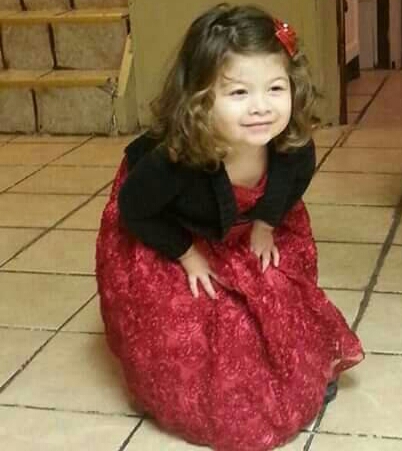